NextGen can calculate stresses in shell and -- in some cases -- stresses in nozzle at the junction with shell according to WRC bulletins (Welding Research Council) 107, 537 e 297.

Bulletin WRC 107 contains directions to calculate local stresses in cylindrical and spherical shells due to external actions. Bulletin provides a series of chars to calculate needed parameters to compute stresses; since this system doesn't work very well with modern electronic calculators, Welding Research Council recently published an update, named WRC bulletin 537, which contains the same charts in equation format. Bulletins are therefore equivalent: WRC states that bulletin 537 is a reprint of bulletin 107, not an update ("It is not un update or a revision of 107. It is the 2010 printing of WRC 107").

Supplementary bulletin WRC 297 contains directions to calculate local stresses in nozzle too, other than those in shell. The applicability is limited to nozzles on cylindrical shells.

As stated in bulletins, NextGen supports the following configurations:

How to calculate WRC values with Sant'Ambrogio NextGen 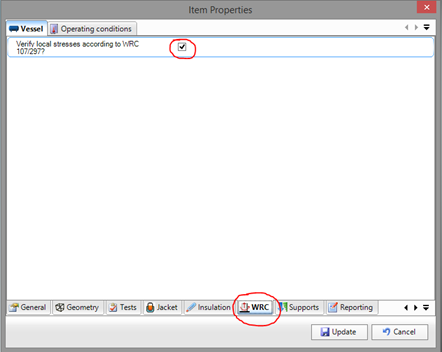 Now, every nozzle, LWN or rigid attachment added to the item contains a new WRC tab. Open the nozzle you want to validate and select the WRC tab like shown in figure.

From the drop down menu "Verify WRC bulletin" it's possibile to enable one or more bulletins to be used in validation. As an option, WRC 107 can be selected instead of 537.

Once WRC is enabled, two more controls will be shown:

For every component, a maximum of 5 "loading cases" can be calculated. Each loading case is a combination of stresses acting alone on the nozzle. To select a loading case (or load set), use the appropriate drop down menu. To enable it, use the checkbox; a load set can be kept disabled, all data are retained but it's not validated neither printed.

After enabling a load set, some input controls are shown: 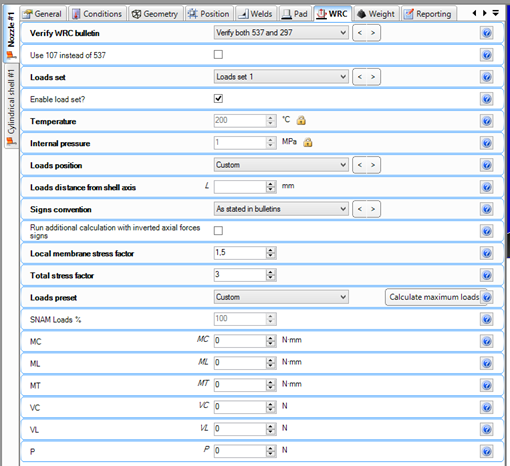 From top to bottom, available inputs are:

Validation runs as usual once every required field is filled.

When WRC needs to be used to calculate the stresses transmitted from a support like a leg or bracket, the same procedure applies. In those cases, a button is displayed, useful to copy applicable loads (notably, vertical loads) transmitted from support to shell.

After using this function, user needs to check values and modify them to consider any eventual other stress not inferable by support calculation.