Up until NextGen 2015.0 version the software included a fixed number of loading cases for what it concerns supports calculation: operating, hydrotest and erection. For each of this cases users had the ability to define different load coefficients in the "Supports" section of component's editing window. Considered loads were weight, wind and seism. The following images shows how different coefficients were defined during the calculation of legs: 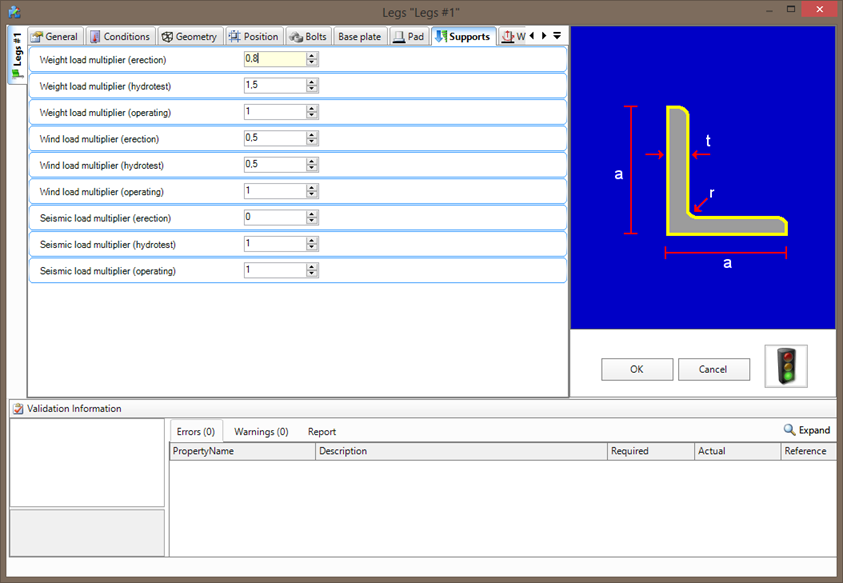 Starting with 2015.1 version, released in June 2015, a new more flexible and complete system to manage load combinations was introduced. Primary characteristics and differences with the previous system are:

Once a file created with an older version is opened, previously set coefficients are automatically upgraded to the new scheme.

Use the buttons on bottom to add new load combinations, either from scratch or using a pre-defined set. Pre-defined sets include 3 typical combinations (operating, erection, test); this sets can be loaded by clicking "load defaults". By clicking "load calculation code defaults" it's possible to load typical combinations relevant to the currently selected calculation code, like those defined in EN-13445 Table 22-1 or ASME VIII Div. 2 Table 4.1.2 (same set applies to ASME VIII Div. 1).

To modify or remove a single load combination, click on the "Edit" or "Delete" button placed on the right of the grid. To remove all the combinations, use the "Remove all" link button. Data are saved once the window is closed by clicking "OK".

When a load combination is added or modified, the following window is displayed. Use this window to set the coefficients of each load or allowable. 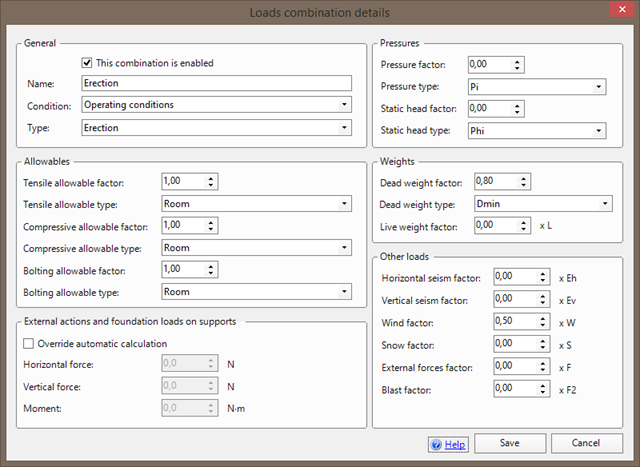 In "General" section the currently displayed load combination can be activated and named. A reference design condition (defined in "Item properties") shall also be associated: pressures and temperatures will be read from these conditions. Finally, a type between "operating", "test" and "erection" must be defined: this property is used in conjunction with the additional weights defined on each component like shown in the following image: 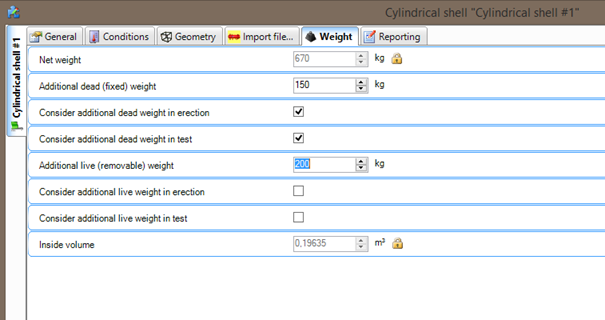 Back to load combination details, the "Allowables" section allows to define which allowable shall be used as tensile, compressive or for bolting. For each allowable, a coefficient can be specified: some calculation codes use coefficients on loads while others on allowables: be aware when using both together since this may lead to a non conservative design.

Pressures used during calculation can be internal, external or test and the same applies to hydrostatic head: this can be defined under the "Pressures" section along with relevant coefficient.

Weights section allows to define which dead weight shall be used between Dmin, Dmax and Dcorr, defined as follows:

Additional dead and live loads defined for each component are applied, depending on which type between "operating", "erection" and "test" is selected under "General" > "Type" property."Other loads" section contains coefficients for seism, wind, snow, external forces and blast. Some loads may not be yet defined and will be activated in future versions.

Previous report had three static columns printed, like shown in the following image:

This view has been replaced by a more flexible one where load combinations are calculated one after another and printed consequently: 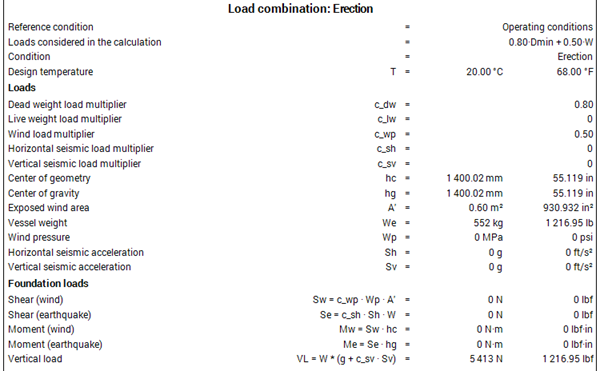 Author: Matteo Bagattini
Published on: 06-26-2015
Previous: How to import an ASME VIII material from Division 1 to Division 2 or vice-versa
Next: How to backup customized elements